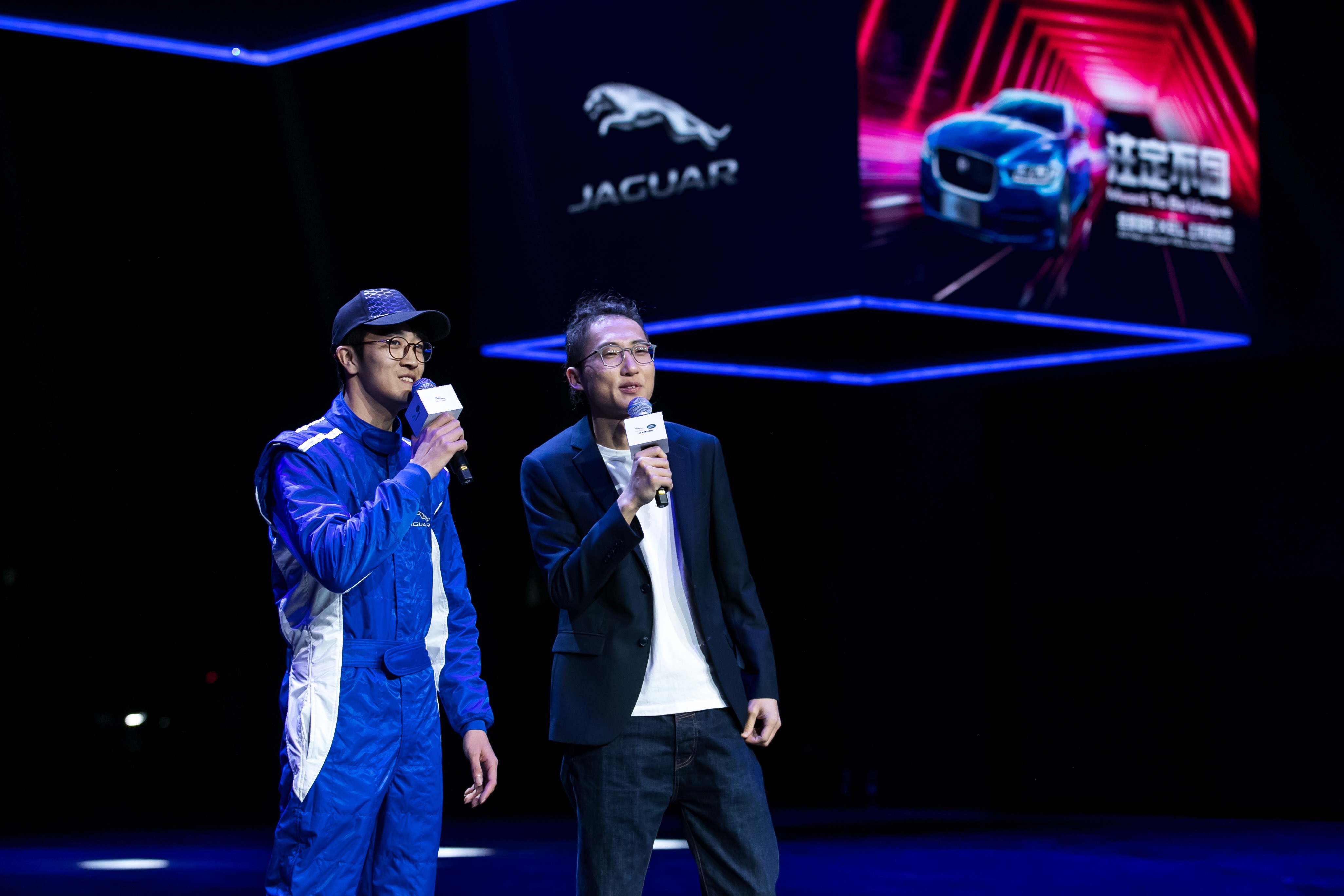 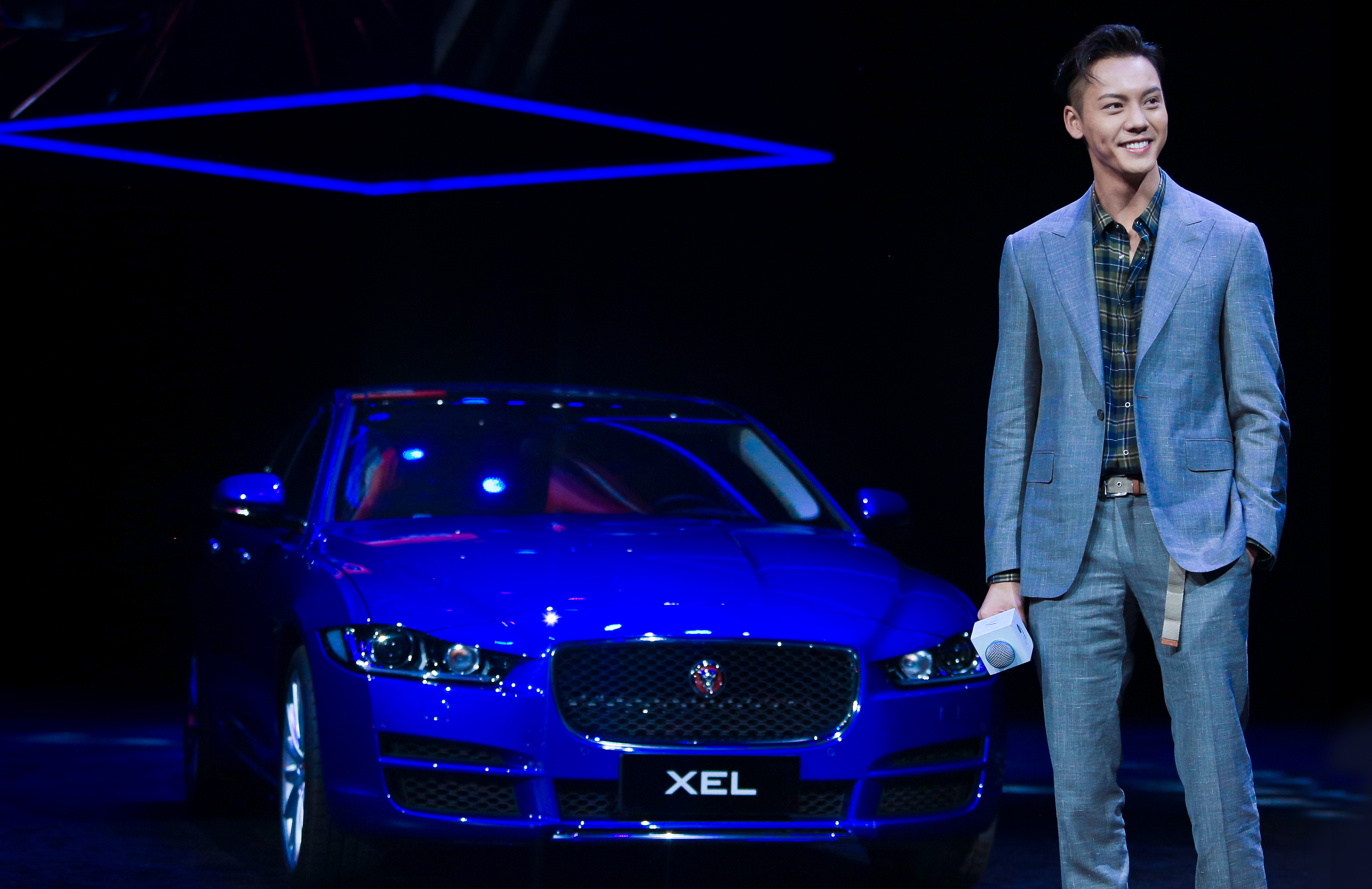 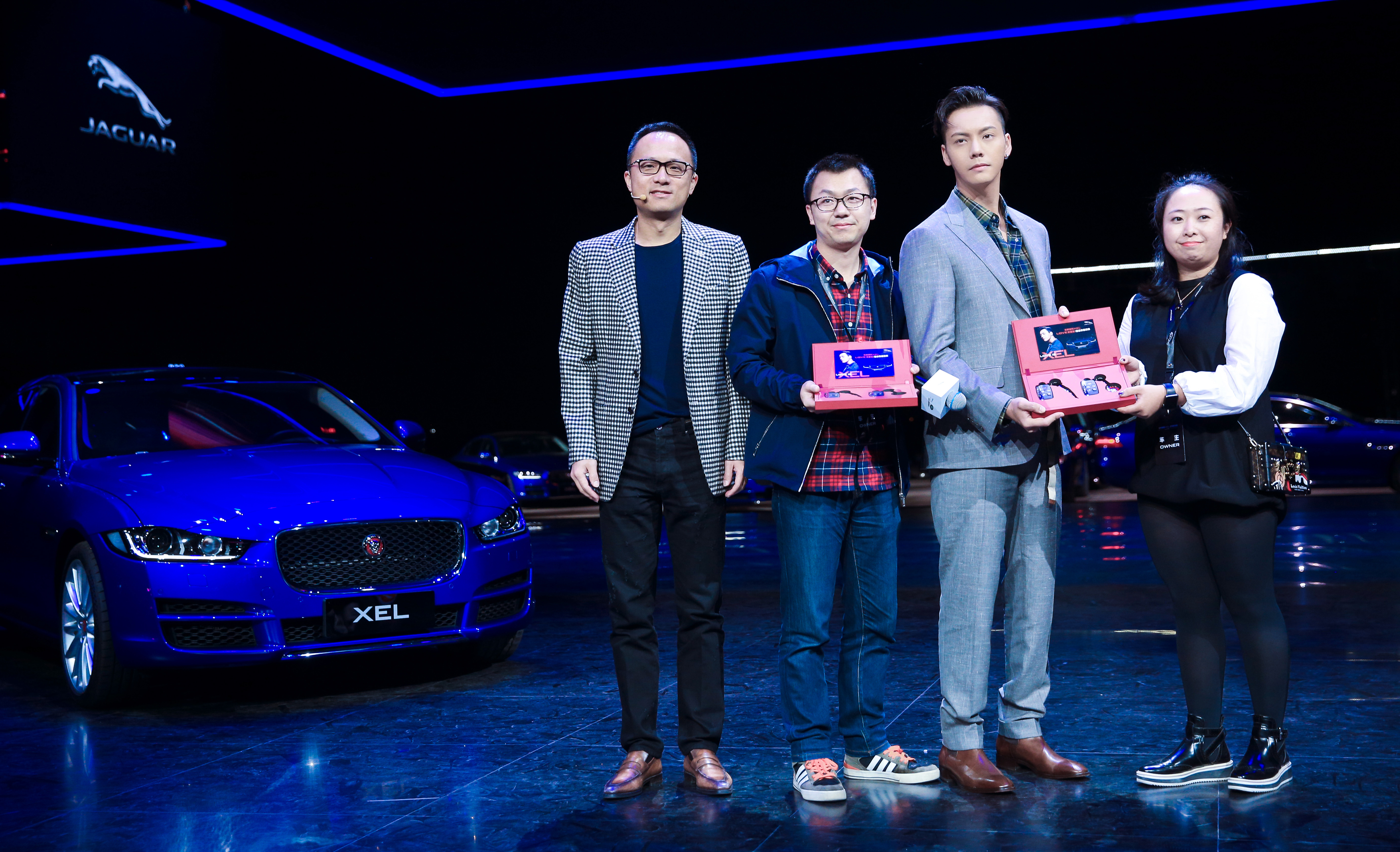 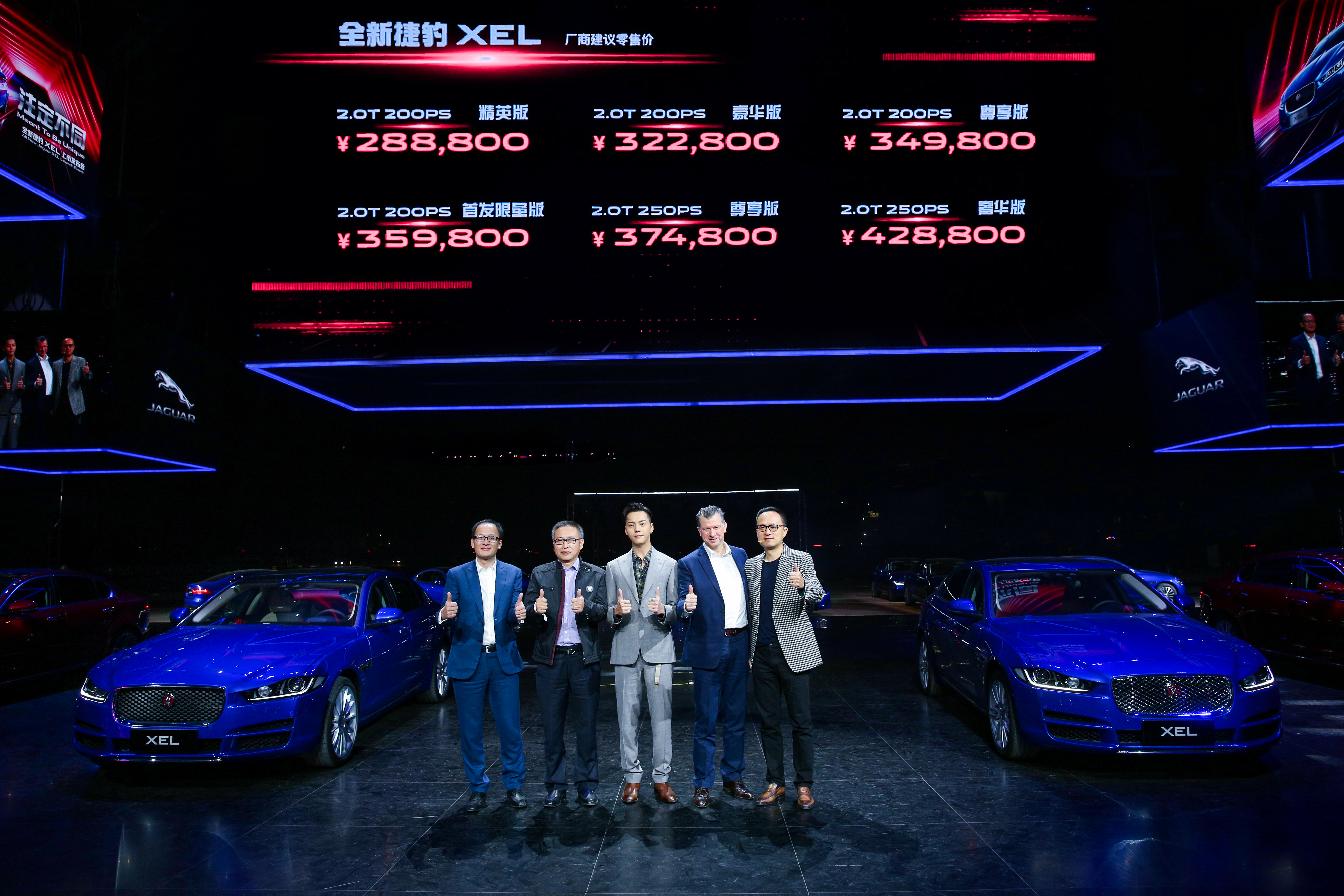 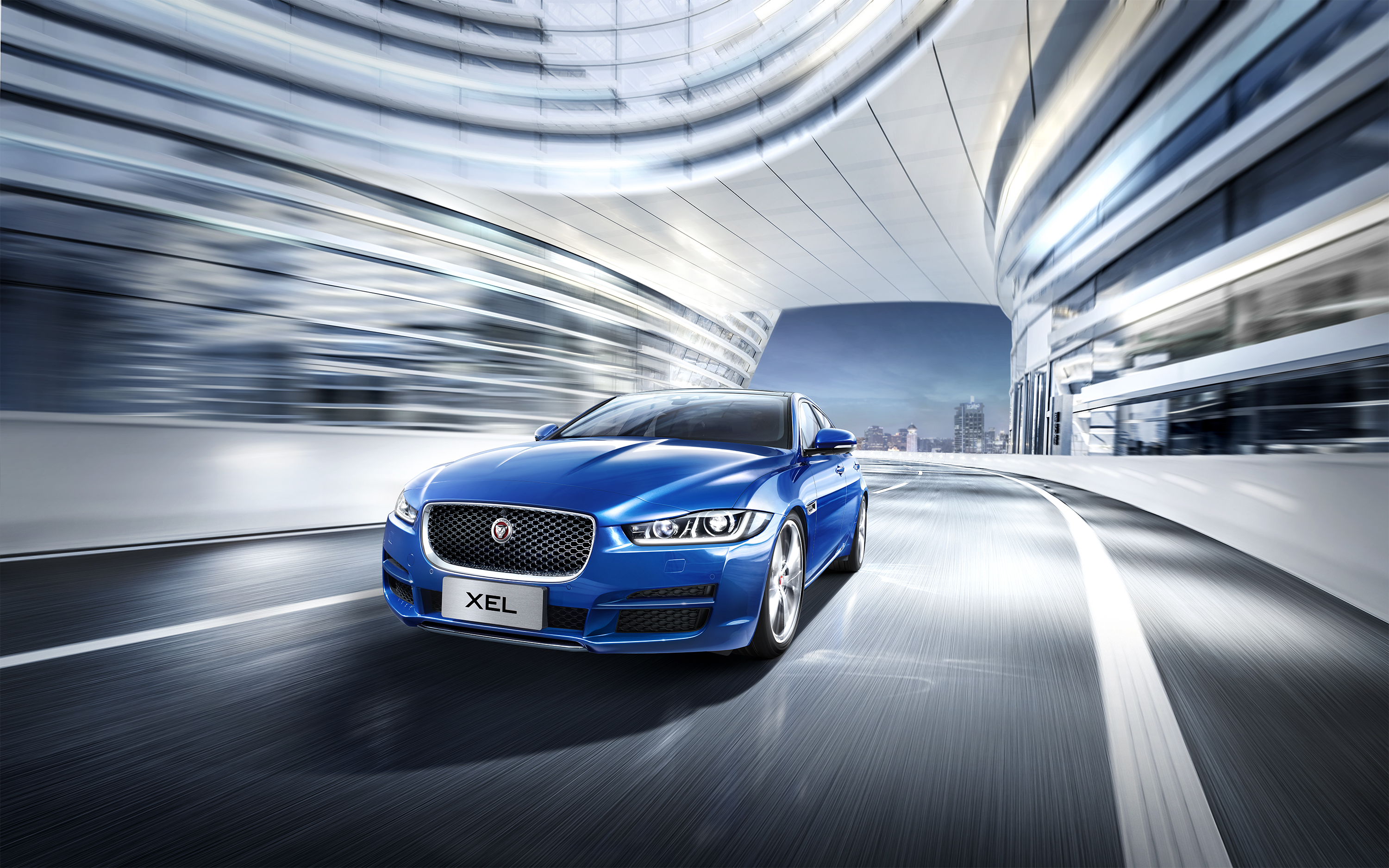 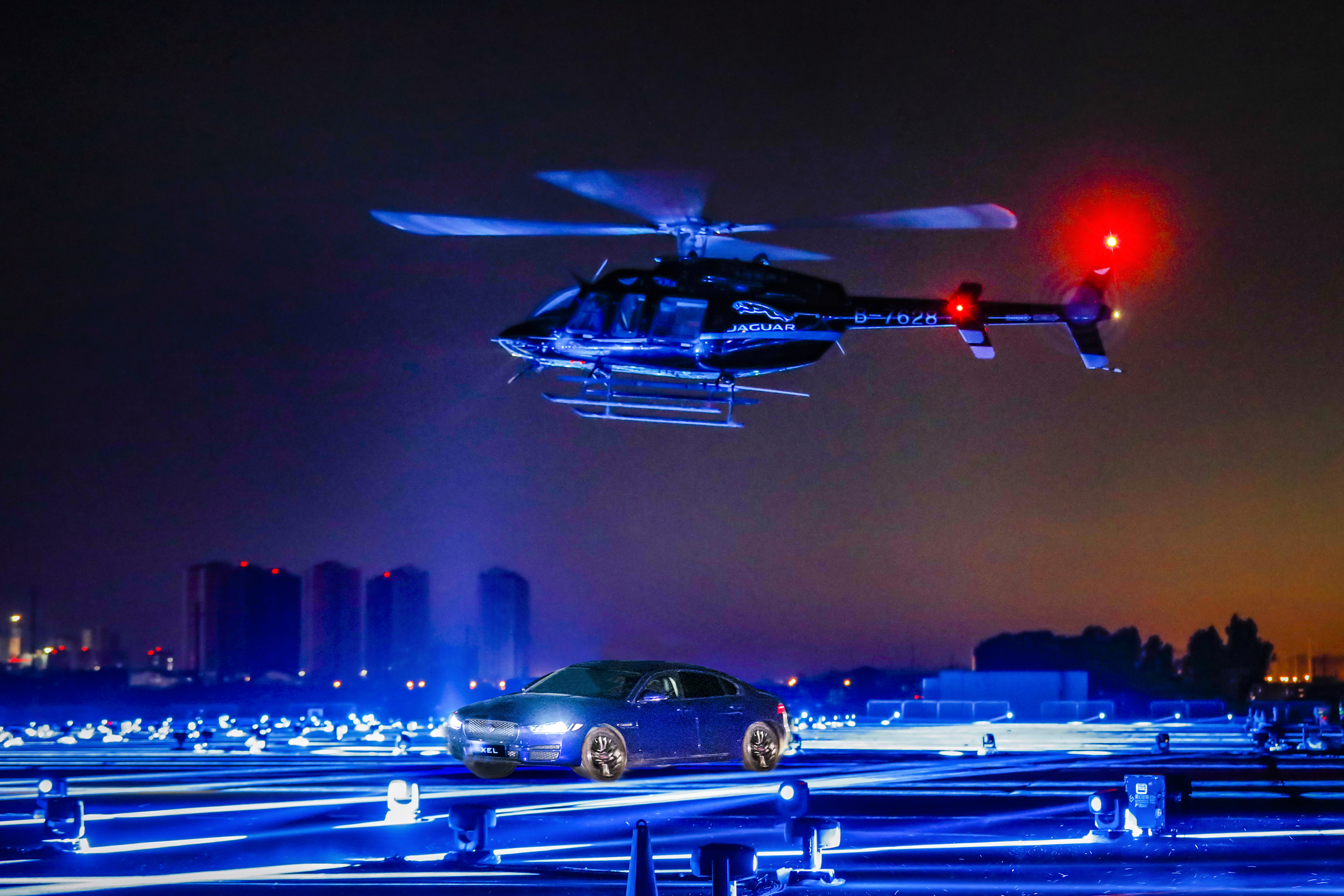 ·The F-PACE, Jaguar’s first performance SUV, is being showcased at CDMS for the first time, reflecting Jaguar’s “Art of Performance” brand philosophy

At the press conference, journalists were shown a video of the M.C. enjoying the comfort and technology of the all-new Jaguar XFL’s rear seats. As the car debuts in Western China, this special appearance impressed the attending journalists. The all-new XFL – the first Jaguar from CJLR – offers the perfect combination of elegant design and advanced technology plus luxurious, roomy internal space. Its wheelbase has been extended by 140mm to offer much improved legroom and knee room for rear-seat passengers. Bringing the ultimate driving and passenger experience, extensive luxury amenities include a rear seat entertainment system and cabin air ionisation technology. Tailored for young business elites in China, the car comes with a host of Jaguar’s latest technologies, including the industry-leading Lightweight Aluminium Architecture, segment-first Clear Exit Detection, and All Surface Progress Control (ASPC). These features have improved the car’s all-weather capabilities and helped it set a new standard for premium models.

With such strengths, the all-new Jaguar XFL breaks into the established market portfolio that has been dominated by three powerful German brands, and will form a new market pattern: ABB+J. Offering consumers a valuable, luxurious British experience, the model with a starting MSRP of RMB 388,000 will go on sale on the 12th September.

This year, the F-PACE, Jaguar’s first ever performance SUV, will be displayed for the first time at the Chengdu Motor Show. Official photos and videos of the vehicle were released at the Motor Show last year and ever since it went on sale in May of this year, the F-PACE has been well received by both customers and the market. Chinese media guests who attended the F-PACE ride and drive at the end of June 2016 in Guangzhou were also impressed. They all praised the vehicle’s highly captivating exterior design and unparalleled dynamism, in particular, the 2.0-litre variant of the car which utilises All Surface Progress Control, delivering great dynamic capability.

For a limited period, F-Pace is available with a choice of attractive customer finance, five years maintenance package or loyalty trade in incentives from dealers across the country.

In addition to the all-new XFL and F-PACE, all other vehicles from all aluminium Jaguar’s family will also appear at the Motor Show, fully expressing the “Art of Performance” philosophy. As the most powerful Jaguar model yet, the F-TYPE SVR boasts astonishing stability at high speeds; The XE is the lightest, stiffest, and most aerodynamic sedan that Jaguar has ever built, providing outstanding driving pleasure; And XJ demonstrates Jaguar’s all-out effort to realise its automobile design philosophy in exquisite detail, giving its cars a lively sense of British glamour.

By showing Jaguar’s full range of aluminium models at the 2016 Chengdu Motor Show it illustrates the ultimate experience of British-style luxury.

The Discovery Sport Special Edition was revealed at the Show. As the top-selling Land Rover model in the Chinese market, the introduction of this Special Edition demonstrates once again that Chery Jaguar Land Rover is committed to providing Chinese customers with more choice and better value. Built based on Discovery Sport SE, the Special Edition cuts a dynamic profile with its Yulong White body paint with black constract roof. The model also provides additional optional features, including passive entry, Rear View Camera, Full Park Assist, and 19-inch nine-spoke wheel, illuminated aluminium tread plates, offering a sense of elegance to its exterior and interior. Limited to 888 units with an MSRP of RMB 428,000, the Discovery Sport Special Edition will start sales in October.

The Jaguar Land Rover Chengdu City Tour was launched ahead of the 2016 Chengdu Motor Show. A fleet of performance luxury vehicles combining innovative design, superior performance, and excellent craftsmanship helped to express the special British charisma of Jaguar and Land Rover. The tour also demonstrated Jaguar Land Rover’s confidence in providing discerning Chinese customers with much sought-after premium brand experience. Adorned with a Union Jack colour scheme, SUVs participating in the city tour were also unveiled at the Outdoor Experience Zone during the show. The models demonstrate the strong off-road performance and extreme driving pleasure delivered by Jaguar and Land Rover by taking on a large 5.2m high 45-degree Pagoda with ease.

Jaguar kicked off the 2016 Art of Performance Tour in early August. The tour will visit almost 80 Chinese cities during the next six months. Jaguar’s full product line-up, including the XFL, Jaguar’s first locally produced model, and the F-PACE, Jaguar’s first performance SUV, will be featured in the tour. With various innovative interactions, the on-going tour will allow participants a chance to experience ‘hands on’ what has distinguished the brand the past 80-plus years.

First initiated in 2012, the Land Rover “Never Stop Discovering” campaign has become a renowned brand and communication platform empowering and motivating Land Rover enthusiasts to discover more. The 2016 “NSD” campaign will kick off after the Chengdu Motor Show. With the theme of “empower and motivate people to discover more”, the 2016 campaign will feature Land Rover’s full product line-up, including the Discovery Sport and Range Rover Evoque, to allow participants to better experience Land Rover “Above & Beyond” brand spirit and authenticity.

Six years ago, JLR entered the Chinese market. As a British automaker with two premium brands, JLR has dedicated itself to steady growth and localization in China.

On the 1st January, 2016, Approved Customer Promise was officially launched globally and seven authorised dealers in the China market began operating pre-owned vehicle businesses. The number has now increased to twenty-three and will rise further by the end of 2016. With demand for used cars growing in the Chinese market, we are confident that our Approved Customer Promise will provide a valuable service to prospective Jaguar Land Rover pre-owned vehicle customers.

2017 will see even more new products and technologies from JLR that will win over Chinese customers, as well as a continued focus on delivering a leading ownership experience for customers.

CJLR is committed to being the leading enterprise inspiring excellence in China’s premium automotive market by delivering world-class products and service. Since its establishment three years ago, CJLR has developed rapidly. In just 18 months, the company has introduced three new models covering Jaguar and Land Rover brands, demonstrating its pivotal role in the mainstream luxury car market. The launch of the all-new Jaguar XFL signifies a new chapter for the company as it marks the beginning of CJLR’s comprehensive development stage of dual-brand operation.

Nearly half of Jaguar’s and Land Rover’s China sales in 2016 were driven by locally produced vehicles, showing that CJLR and its products are highly recognized by Chinese customers. Relying on efficient operations and exceptional talents, CJLR will continuously introduce the latest products and technologies in China to provide customers with more choices. By launching at least one new model every year before 2020, CJLR has been deepening its presence in the Chinese market.

Dedicated to offering first-rate brand and product experiences in China, CJLR will continue to meet the diverse needs of consumers to fuel further success in the country. By following shared-value concepts while fulfilling corporate social responsibility, CJLR will remain the leading enterprise inspiring excellence in China’s premium automotive market.

Staying true to its long-term development and Customer First philosophy, the Integrated Marketing, Sales and Service (IMSS) between JLR China and CJLR bases its approach on the market and its customers on efficient, smooth operations. Thanks to extensive efforts in sales, customer service, local production, and cooperation with dealers, Jaguar and Land Rover are enjoying steady, sustainable business growth in China. Both brands have posted healthy China sales for the first eight months of 2016, with strong year-on-year growth.

JLR China and CJLR currently have 205 authorised dealers operating in China, offering a well-balanced dealership network so that all customers can conveniently enjoy the best products and services.

JLR China and CJLR have brought their full range of British-style models to this year’s Chengdu Motor Show, showcasing their confidence and commitment in the Chinese market.