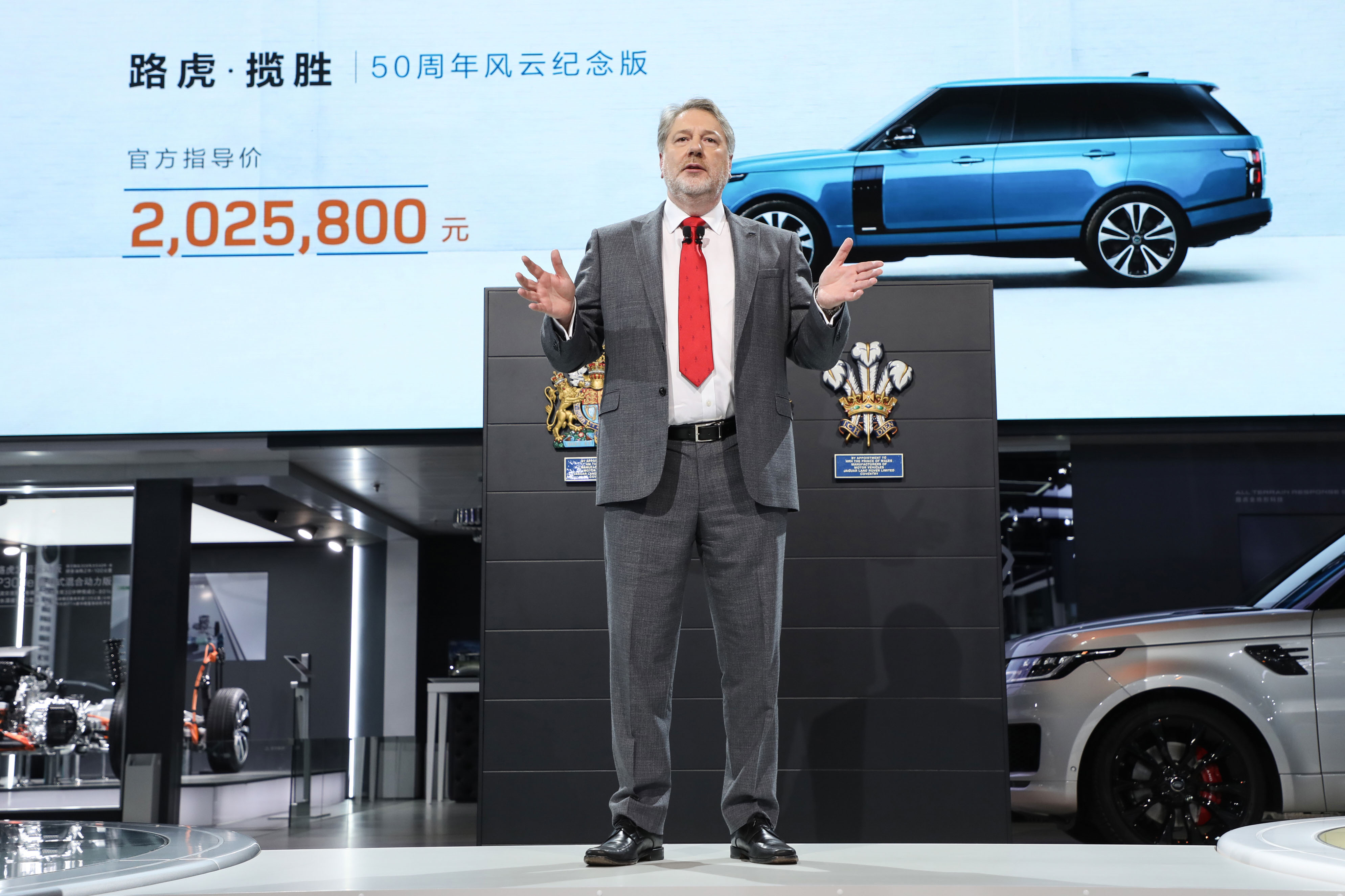 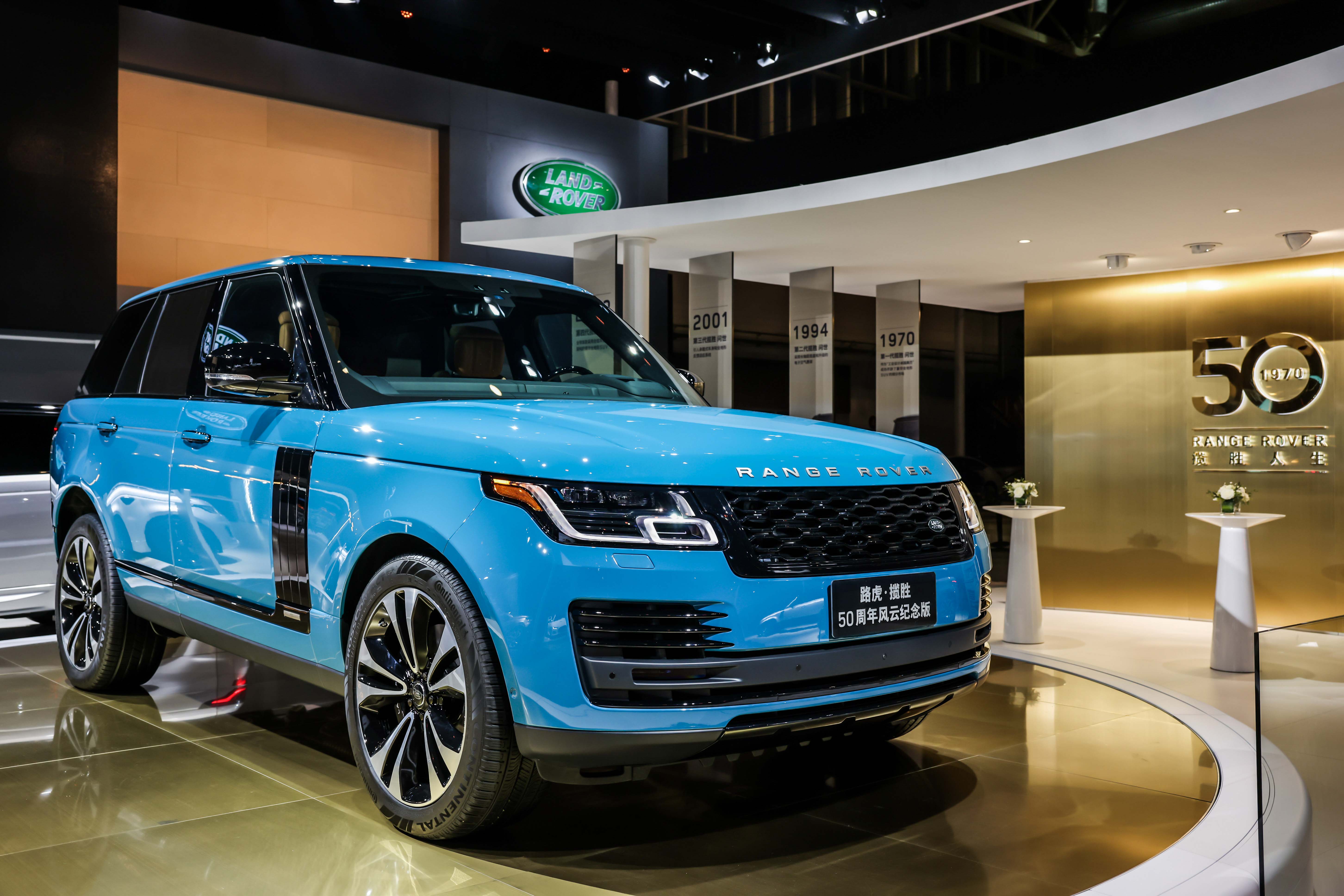 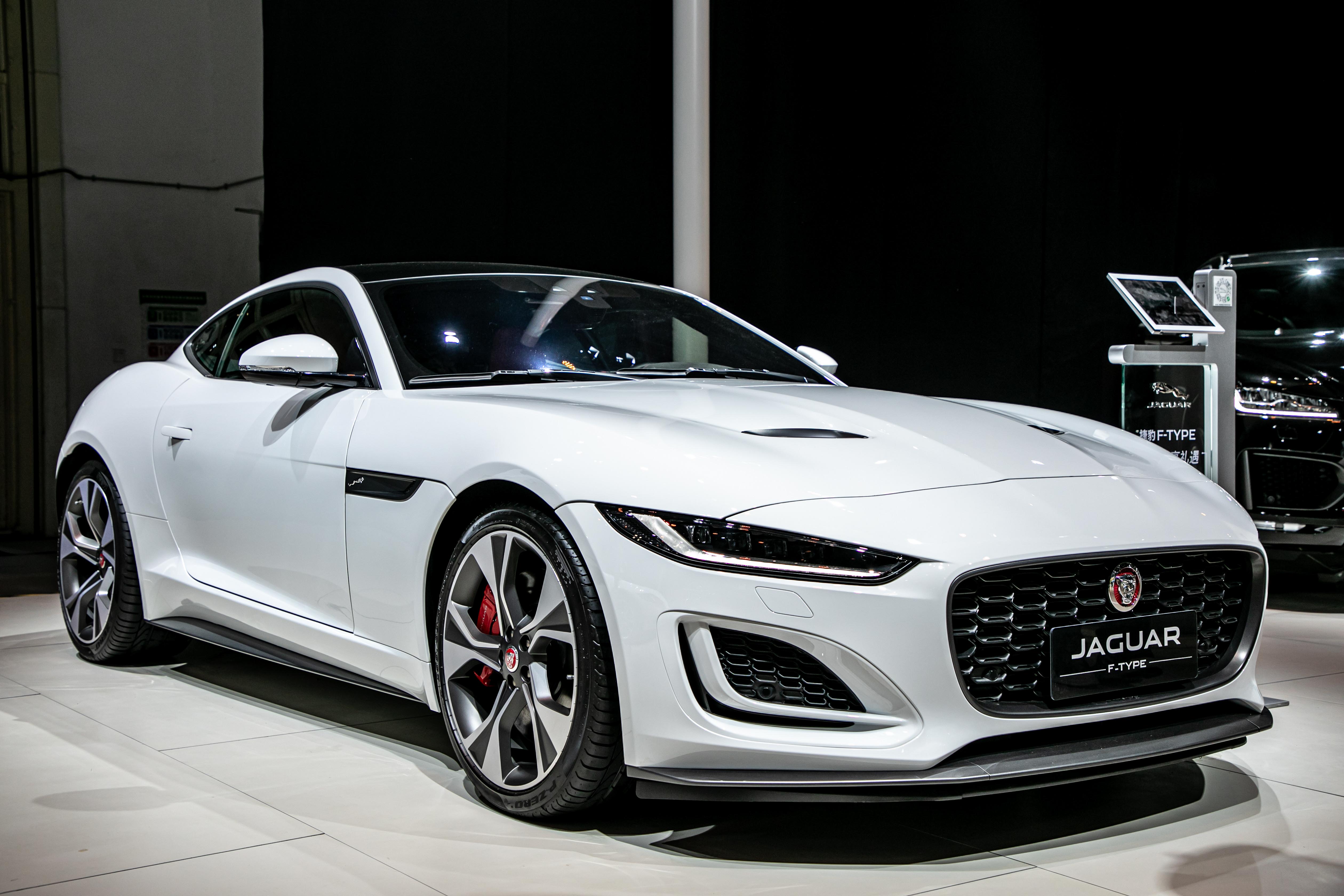 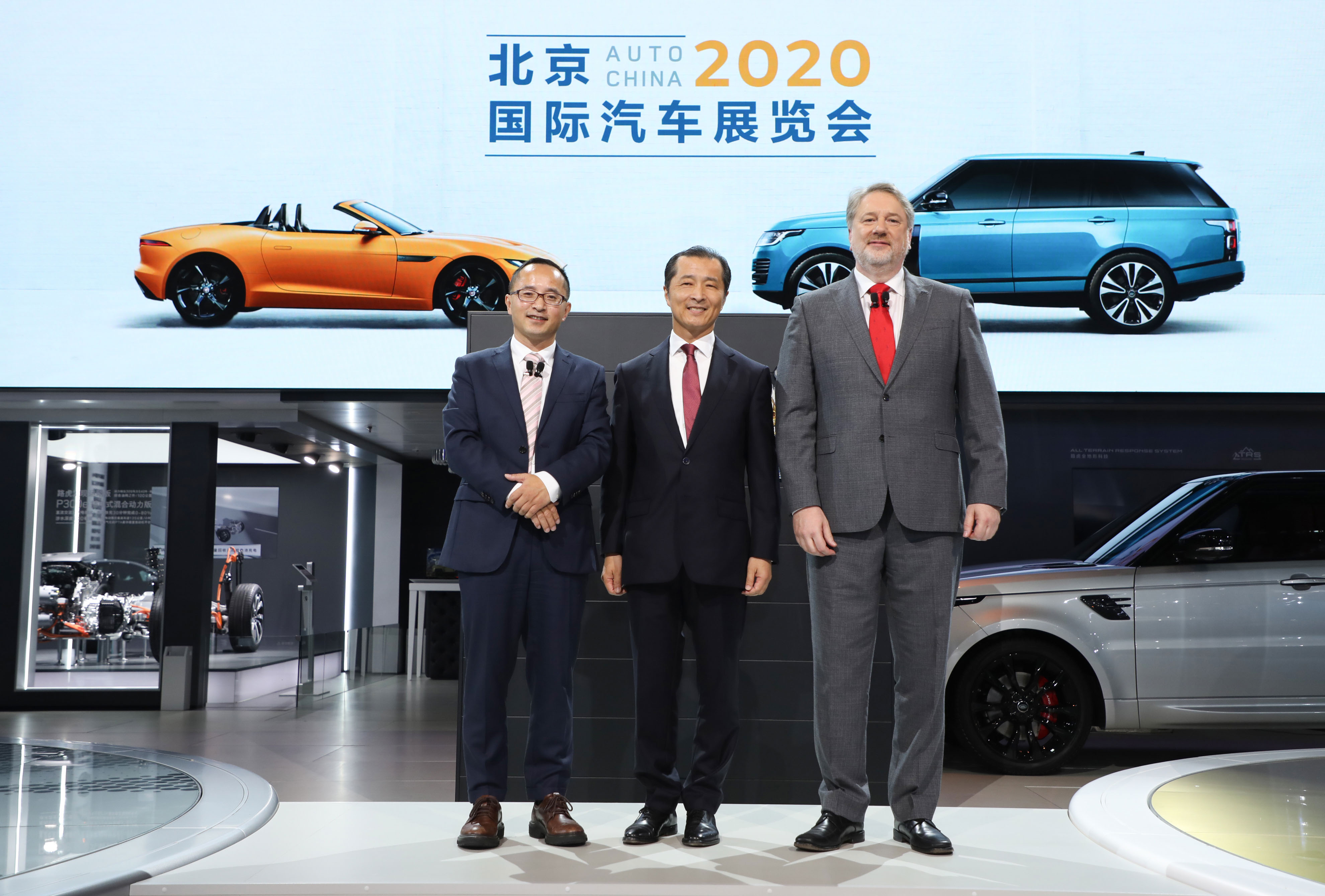 (Beijing, September 26, 2020) The 16th Beijing International Automotive Exhibition opened its curtains on September 26, 2020. Jaguar and Land Rover brought their star models to the show, presenting an authentic British feast for the audience. The much-anticipated Range Rover Fifty was officially launched. Its MSRP in China is RMB 2,025,800 yuan. The new Land Rover Discovery Sport P300e – the first new energy model of Jaguar Land Rover to be produced in China, made its debut in China.

Models from the Range Rover, Discovery and Defender families were also lined up on the stage to show the “Above & Beyond” brand concept of Land Rover. Jaguar took its premium all electric SUV – the 2020 Jaguar I-PACE and the new Jaguar F-TYPE sports car to the show, demonstrating the unique charisma of the Jaguar brand.

This year marks the 10th year since Jaguar Land Rover entered China in 2010. As the SUV market in China thrived and consumption upgrading arises, Jaguar Land Rover has been pushing for a localized strategy, successfully weaving itself into the shared social, economic and cultural development in China in the past decade. The year 2020 sets many milestones for Jaguar Land Rover. The Jaguar brand is celebrating its 85th anniversary this year, delivering one-of-a-kind modern British driving experience with upgraded products and differentiating technology strengths. For Land Rover, 2020 marks the “Year of Product Offensive”, as they launch a number of critical models through innovative marketing campaigns and celebrate the “30-50-70” moments in their history. “30”, for example, refers to the 30 years of the Discovery family since its inception; “50” signals the 50 years of journey travelled by the Range Rover family; and “70” marks the spectacular return of the Defender, a 72-year icon of the brand. In two months after its launch, the New Defender has been widely acclaimed in the Chinese market, and 3,000 orders are received already as of today.

Tribute to the Classics – Range Rover Fifty Launched in Glamour

After four generations, the Range Rover family has written history time and again with many world-firsts in design and technology, as well as many unprecedented achievements in human history. Over 1 million Range Rovers have been sold to customers all over the world. To celebrate the 50 glorious years of the all-time benchmark in the luxury all-terrain SUV market, Land Rover launched the Range Rover Fifty, limited to 1,970 units globally to mark the 1970 birth year of this original Range Rover.

The Range Rover Fifty features a “Fifty” badging element on the exterior of the vehicle and throughout the interior, on the center console, headrest and illuminated treadplates. The “Fifty” script full of true British class and artistic taste was created personally by Professor Gerry McGovern OBE, Land Rover’s Chief Creative Officer. Under the ceremonial gear knob is the refined “1 of 1970” Commissioning Plaque, which is a reminder that this is a piece of history – a collection piece with 50 years of heritage in it.

Richard Shore, President of Jaguar Land Rover China and Chery Jaguar Land Rover Integrated Marketing Sales and Service（IMSS）said, “Five decades on, the Range Rover has evolved to become the most desirable and capable luxury vehicle for over one million satisfied customers. It is the choice for the most successful and discerning individuals including dignitaries, celebrities and royals. Range Rover has achieved many world firsts. It was the first SUV to feature a permanent 4WD system. It was the world’s first SUV to be fitted with ABS anti-lock brakes; I was also the first SUV to be fitted with electronic traction control, and the first all- aluminum monocoque SUV. It has always been the leader.”

The New Discovery Sport P300e unveiled at this Beijing Auto Show is the first new energy model of Jaguar Land Rover to be localized in China. It will be manufactured at the Changshu Plant – the most advanced benchmark plant of Jaguar Land Rover in the world. With its state-of-the-art green technologies, it will create exceptional driving experience and an easier and greener lifestyle for the new mid-class families, leading a green future with innovative, future-oriented technologies.

Mr. Henry Zhu, Deputy President of Jaguar Land Rover China and Chery Jaguar Land Rover Integrated Marketing Sales and Service（IMSS）said, “The New Discovery Sport was launched in March this year, and it instantly became the strongest competitor in the Mid-size luxury SUV segment, thanks to a series of technologies and equipment that created many firsts in the market. The arrival of P300e reflects the technological development trend, and offers consumers more options to own a Land Rover.”

Based on the Premium Transverse Architecture (PTA) platform designed to support Land Rover’s visions in new energy and smart technologies, the New Discovery Sport P300e is endowed with the best electrified powertrain and lots of electrification technologies. As a result, it is the perfect combination of versatility & functionality of the Discovery Family and the environmental benefits and cost efficiency of a plug-in hybrid.

The New Discovery Sport P300e offers leading powertrain combining a Jaguar Land Rover’s Ingenium engine and an electric motor. Working together, the car delivers 309Hp maximum power and 540 Nm max torque. Thanks to its electrified technology, its fuel economy can be managed to 2L/100km under Hybrid mode. The front and real drives can independent from each other, which allows the New Discovery Sport P300e to bring out its maximum power performance and off-road capabilities, as a true Land Rover with the signature all-terrain capabilities.

With visionary battery technologies and highly intelligent power management system, the New Discovery Sport P300e is also the only PHEV model in its segment that supports both AC and DC charging: the quickest DC charging works at 32kW and gets the car from 0 to 80% charged in just 30 minutes; and under AC charging, the battery can be fully charged in 2 hours.

The Jaguar brand has always made sure that it keeps up with the pace of fast technological innovation, while continuing to pass down its pure track heritage. As the brand celebrates its 85th anniversary, the 2020 Jaguar I-PACE – the first all-electric performance SUV of Jaguar, appeared at the Beijing Auto Show. The premium all-electric SUV with authentic British heritage and craftsmanship, Jaguar I-PACE combines the comfort and luxury of a saloon, the sportiness of a sports car, and the space and ground clearance of an SUV, plus Jaguar’s racing DNA with electric driving. It marks a new page turned in Jaguar’s electrification strategy.

As a pioneer of electrification among premium auto brands, Jaguar Land Rover has established solid foundations in China and the world for its new energy strategy implementation. At this year’s Beijing International Automotive Exhibition, Jaguar Land Rover kicked off a new phase of its electrification and revealed a clear strategic direction going forward, which is to further expand its new energy portfolio and offer more products and services to meet the diverse demands of consumers. Jaguar Land Rover has never stopped innovating and challenging its own limits. As a result, it has always been a trend-setter in the premium segment. Jaguar Land Rover is ready to keep exploring the new possibilities in life with its fans all over the world, and it will continue to bring exceptional, authentic British experience to consumers in China.